In the previous post, I have written about the impact of the education level of a country on that country’s income level.  But, countries are a collection of individuals, and “country income” is nothing but the value of goods and services produced by these individuals.  So, at the heart of the issue is the question of whether the productivity of individuals and their personal incomes go up when they are more educated.

When we analyze data obtained from large samples of individuals around the world, we always find that more educated people have higher incomes than those who are less educated.  Most people won’t be surprised by this finding, but it could be surprising to realize the magnitude of the income jump created by extra education.

The two graphs below display the average before-tax wages of workers with different levels of education in a high-income county (U.S.) and in a developing country (Turkey). 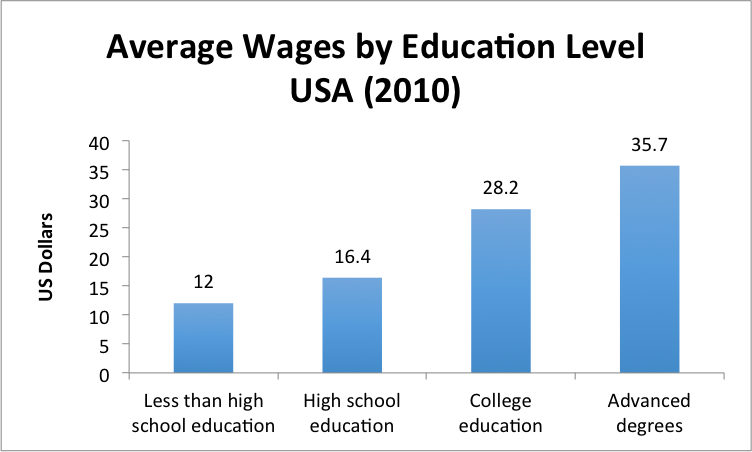 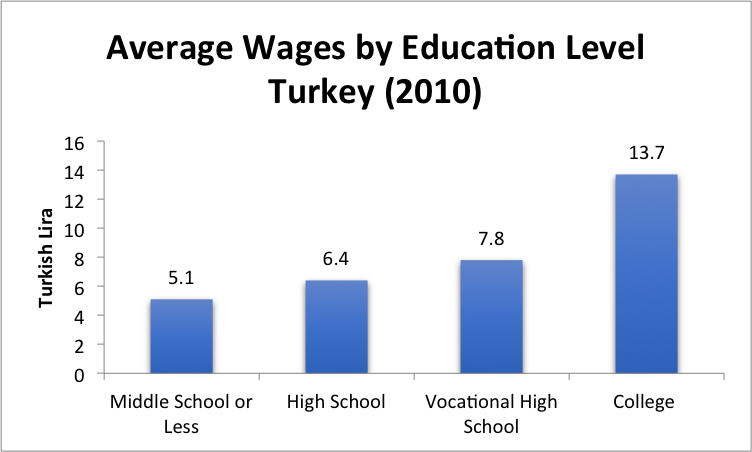 The same pattern exists in Turkey.  Workers earn TL 5.1 per hour if they have a middle school education or less.  Workers with a high school degree earn TL 6.4 per hour, or 25% more.  Those with a technical (vocational) high school degree earn fifty percent more than the group of workers who have middle school education or less.  College graduates earn more than twice the hourly wage of high school graduates.

These are quite substantial differences in earnings between people with different levels of education.  This pattern exists in every country in the world, from China to England, from Indonesia to Israel, regardless of the country’s level of economic development.

The important question of course is the following: Do these differences in wages really reflect the impact of education, or do they represent something else?  Perhaps more educated people come from wealthier families who have connections in their community, so that children of these families would have earned higher incomes even if they have not attained more education.  In other words, kids from wealthier families obtain more education than poorer kids and these wealthier kinds earn higher incomes when they grow up, but this is not because of their education but because of their family wealth, and connections.

There is another possibility.   A person’s attributes such as intelligence and discipline have an impact of their productivity and earnings.  Therefore, wages of those who have more intelligence and more discipline will be higher.  At the same time, more intelligent and more disciplined people will find it easier to succeed in school.  This means that people who are smarter will have more education because school is easier for them, and they have higher wages because they are more productive in general. If this is true, people earn higher wages not because they went to school for more years, but because they are smarter than those who stopped going to school.

Economists use statistical techniques to take into account these and other potentially confounding factors in order to isolate the true causal impact of education on earnings.  These studies show that one additional year of education increases workers’ earnings by about 10%.

This means the following.  Take two individuals who are identical in every respect: they have the same age, same sex, same work experience, same family background, same intelligence, and so on, and they work in the same industry. If the first worker has three more years of education than the second one, his wages will be 30% more than the second worker.   This is the direct, causal impact of education.

This 10% returns to an additional year of schooling is realized because schooling enhances both the skills of the workers as well as their cognitive ability.  As a result, more educated workers are more effective at their jobs and they earn higher wages.

Furthermore, the returns to education have been rising in recent years. More educated and more skilled workers are getting rewarded increasingly more in the labor market, and wages of less educated workers are getting stagnated.  This is because improvements in technology require workers to be equipped with better skills to be able to utilize these new technologies.

All this means is that education is a great investment to increase both the skill level and income of workers.  This investment is even more important for economic development of countries that currently have low levels of education.